Yeah, I know, I haven’t posted in a while but then I haven’t been to the movies in a while. This one will surely bring me back to my big screen romance (I am currently courting the small screen): 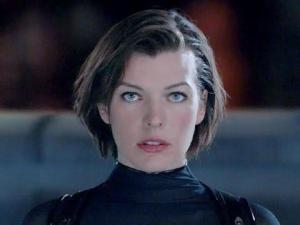 Remember when I wrote that Resident Evil: Afterlife might be the last of the series? Well, I was wrong! Here’s the first promo – and no, it’s not a commercial:

Yes, I know, it looks AWESOME. And more AWESOME: Rain Ocampo is back in the series. Michelle Rodriguez, man!

Only question now is: where do I get my ticket?

A couple of days ago I had an inkling to go and watch a show I had never watched before – or only little of. I rented the first cd of both Lost and True Blood and must say, I liked Lost better – despite the fact that True Blood has the better accents (or maybe it is just one accent but it is just the best accent ever). So, I now watched 20 eps of Lost and I like it though I am not sure what to make of it.

And I like it. It’s not Xena, mind you, nor Buffy (although I must say, I like the official photos of the cast much better than those of Buffy, what an exotic location can do…) but it has elements of action, and fantasy, and weird what-would-you-bring-to-a-deserted-island-thematic. I mean, this island is paradise, right? Yet, it is also hell… no way around it, and on top of that there is something big that is going to kill everyone eventually, and polar bears, and dogs running around without a leash, it’s a nightmare.

Oh, but for the views, and by views I mean: how hot is Kate?! Evangeline Lilly is incredibly hot (though sometimes when they just show her face you wonder how old – and by old I mean young – she is; close up she looks  like a little girl, might be the freckles…). Actually it is almost rediculous how many beautiful people were on that plane. Of course, friends that been to California have told me that the women there are incredibly hot, but I didn’t know that they all flew in from Australia.

The above picture already indicates on what I am waiting for now: Michelle Rodriguez. Had she been on that show from the beginning I would have watched it from the beginning. I have to check out imdb.com to see when she’ll be on. Useless to say, I like her – every lesbian with a pulse does. And not just because she is hot, but because she’s a really good actress. And let’s face it, I got a thing for tough women (another reason to also like Kate…).

(Is that Kate and Jack playing Twister?)

Oh, for the plot: it is interesting and it can get you hooked. But I am always more into characters… and there’s a lot of that. I like how the stories of the main players are told in flashbacks, how they all seemed to be destined to be on the plane that crashed, how their lives crossed without them realizing it (Hurly owned the box company Locke worked for, on the tv in Japan at Sun and Jin’s you see Hurly being interviewed about his lottery win and so on).

The show is also strangely interwoven into a topic that interests me at the moment: queerness in heteronormative environments (or maybe it is hyper-heteronormative environments). We have still to discover a queer character on the show but that the microcosm of the island is heteronormative is clear… and not just from the fact that they named the bodies they found in the caves Adam and Eve… the love/hate-triangle of Kate, Jack and Sawyer… Sayid and Shannon… Shannon and Boone (though that seems a little incestuous, and I am wondering if incestuous relationships can be considered queer)… John Locke might be gay, or maybe he is just really into male bonding…

Anyway, I like Lost and I will keep watching – at least for now.

What I want for Christmas this year? My own avatar! Or at least Sigourney Weaver’s.

I have just watched the movie – and I know what you’re thinking: you’re a little late, aren’t you? And yes I am. There were reasons I won’t go into now but they had nothing to do with not wanting to see it. I wanted to and now I have.

Sometimes I feel that through my studies I have lost the ability to just read a book for enjoyment, and I get the same feeling about movies and tv shows – sometimes. This did not happen while I watched Avatar but sitting here now, doing what has become second nature (analyzing a story, that is) I start to forget how wonderful the movie looked and felt. I am not exactly a fan of 3D – who has been since now? – but it was pretty amazing with the world Cameron has created. Feeling Pandora – let’s face it, it was amazing. The whole world, the animals, the Navi, the trees and everything about it… AMAZING.

The idea of a world like this is not new, the idea of “surrogates,” even “Sims,” we want to have someone perfect in this world to represent us. The way Cameron filmed this vision was mind-blowing, though.

But alas, the story… Was I the only one who was reminded of Aliens? And not just because of Sigourney Weaver. Think about it: in Aliens we had the Terraformers who inhabited this really gruesome place (I forgot its name). Then the aliens come and kill them or preserve them and then there come the army guys. Okay, you could say, that’s completely different from Avatar, it’s pretty much the other way around with some American history thrown in. The Aliens are not the bad guys anymore, they are the savages, the natives, indigenous (to use PC). And who are the terrorists now?… Right. The army guys who want to take over because of something valuable in the earth of this paradise.

Maybe it was just the characters. When you make the link between Giovanni Ribisi’s character and Burke from Aliens or between Trudi and Sanchez… it’s quite obvious. Put Sigourney Weaver into the mix and yes, it is another Alien-movie. Distorted, yes, but the essentials are still there. This is not a bad thing, per se, but it makes clear why Avatar did not win as many Academy Awards as some thought it would. While it is stunning to watch, the story is neither new nor especially innovative.

And I guess for an economic utopia fairy-tale I personally would have preferred a female hero (even if that is a clichée). Maybe it is just that I fell in love with Sigourney Weaver’s avatar on first sight, maybe I am still angry that Cameron let her die, maybe it felt like all the times great female heroes in films did die and only men were left to save the (any) world… maybe it is because I thought of Aliens the whole time I watched Avatar. And maybe this is one of the reasons Avatar is not really a great story for me: because it is the repetition of the myth of the male fighter, the savior is male, strong females die or succumb to male charm. I do not buy into that anymore, it bores me. Call me a lesbian feminist if you want (after all that’s what I am!) but… having a movie with Sigourney Weaver and Michelle Rodriguez in it and letting both die – that’s lame!

I guess, it’s the little things that can make or break a movie for me. I know, I will own it on DVD and will find many reasons to like it. I will also write about it some more, compare it to Aliens and other movies… I will always be amazed at the sheer splendor of it, sure, but it will always be bitter sweet. The moment Grace died, it felt like the movie was over – for me.

I know that I am quite the sucker for people in movies. Characters and the people who play them are my main focus, they have always been. I do not watch films with certain actors in it although the movie might be good. I am also pretty tired of films that underline machismo too much, where extras (people in the movie) are killed just to have one hero to make it all worth it. And look at Avatar! It is done there, too. Seeing all the Navi die… it was disturbing and though Cameron meant it to be disturbing it is still done in the most brutal way. We had a discussion once in a film class about this: is it still a critique on violence and war when it is done so elaborately and almost sensational? I don’t think so. I think, killing living things in such splendor is like making war propaganda… and even though I know Avatar is a critique on war, on environmental polution, on genocide, the ending – ultimately, the victory of one hero who saves everybody – makes these things necessary and inevitable. For the hero to be a hero there has to be bad guys who kill everything that is good. I wonder if a different ending – one in which even the hero dies and the bad guys win – would not have had a greater impact.

But that’s just me, I guess…

Looking for a particular genre?