The Private Lives of Pippa Lee (2009) by Rebecca Miller

I should say that I pretty much only wanted to watch it because Julianne Moore once again plays a lesbian. Yes, I am that easy but it is Julianne Moore after all. Then again, I was always looking forward to watching a movie with Winona Ryder again, I kinda missed her. And then there are beautiful (and talented) actresses like Robin Wright Penn, Maria Bello, and Blake Lively. So, all good, right?

Not really. I mean, this is a good movie, surprisingly good. I cannot say that I am a big fan of books with pink covers and strange lettering and titles like Divine Secrets of the Ya-Ya Sisterhood or anything by Celia Aherne (I just browsed amazon, and did you know there was an actual title for this kind of literature: chick lit!… ). The Private Lives of Pippa Lee fills the description perfectly, still it had an intriguing trailer and I was willing to watch it just for the female cast and Alan Arkin (no, not Keanu Reeves… I usually pretend he is not there and it is so easy with someone who has so little talent).

The movie was entertaining, there was a lot of giggling in the audience and some laughing and some of that was from me, I am not ashamed to say. Robin Wright Penn just showed amazing talent to present a woman who is not really that interesting because she mostly gave up herself to live for her husband. In flashbacks she tells the story of her younger self who was smothered by her mother (Maria Bello) who was addicted to pills and suffering from bouts of depression. After Pippa ran away from home she got under the “evil influence” of her aunt’s lover  Kat (Julianna Moore) and posed for SM-pictures for her. When her aunt finds out Pippa continues her career without Kat but pretty much on the same nod. She does drugs and loses two years of her life just being reckless and promiscuous and not very likeable – even in her own opinion. 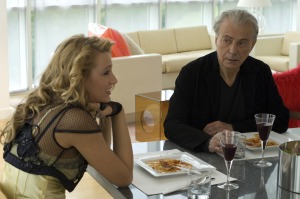 Then she meets Herb Lee (Alan Arkin), who is 30 years her senior, and starts an affair with the married man. When he finally tells his wife (Monica Bellucci) of the affair she shoots herself. Pippa and Herb never again talk about her, though she tries to. Twenty years later, the kids are all grown-up, Herb is retiring after three heart-attacks, Pippa finds out that Herb, whom she lived for the last 20 years, is cheating on her with a younger friend. But instead of being devastated she feels elated and wants to leave him. But he has another seizure and dies. Pippa is free to begin a new chapter in her life – and starts it by running away with the neighbors’ half-wit son (Keanu Reeves).

Let me tell you, the acting was brillant. The story was not as dramatic as it seems but had a lot of funny moments and shock moments (as when Monica Bellucci shoots herself..). I still have a few problems with the whole thing… why does one of the two lesbians in the movie has to seduce a minor girl to pose for porn? Why does Pippa Lee – finally free of the burden of a twenty-something-year long marriage – starts her new life with a new man? Instead of enjoying herself for a change? (Yeah, I know, the whole relationship to the “half-baked” neighbor is portrayed as if he is all about her and her pleasure now but gosh… why is it so hard to imagine that a woman just wants to be by herself for some time?) Why does the daughter hate her father suddenly when she always wanted his attention and his attention only and slighted her mother at every occasion? (Yeah, I know this can be explained by Freud but I am not listening to that crap anymore!)

So, on the whole I enjoyed the movie a lot but those questions bother me. I also know that the tropes behind those questions feel necessary to a filmmaker but they make me furious. I am also curious about the question of why does Julianne Moore enjoy to portray sexual egomaniacs so much? I don’t know but she looked rediculously hot without make-up, without bra and the special lesbian do…

Looking for a particular genre?